This weekend's shocking news footage of the crane collapse at Sao Paulo's World Cup Stadium skipped past the names of the two construction workers killed and moved straight on to the problems it may cause to next summer's football fest. 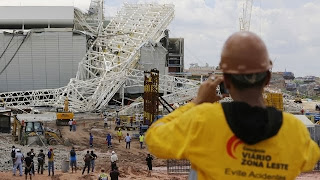 The sight of that crane wrapped around the stadium sent a shiver down my spine and took me straight back to the worst day of my career in construction. Crane accidents are often'construction related' so it is tempting to think that the work ofdesigners is not linked. But are these deaths linked to projects that are behind programme against a deadline that cannot be missed? How does our work as designers influence job culture and how can we help reduce the risk of these errors happening, particularly when faced with tough programme deadlines?
In the late 1990s, before I joined Atkins, I was on site in Milwaukee, USA, where the 180m span retractable stadiumroof designed by my team was under construction. Dominating the construction site was 'Big Blue', a mobile crane that had turned up on 60 trucks, taken 40 days to build, and was now lifting 400 ton roof sections 400 feet into the air. Since I was not often on site I had wanted to see a lift happen, but we were told it was too windy. It wouldn't happen.

That afternoon we were in the site huts around half a mile from the stadium when there was the most terrible sound I have ever heard. It was the sound of 2,000 tonnes of steel falling in into the stadium. Hundreds of truss members buckling and being ripped apart. Perhaps it went on for 15 seconds but it felt like it lasted forever. Strangely the sound of a car on gravel still reminds me of it - for the first few years afterwards I would literally freeze when I heard that sound unexpectedly. 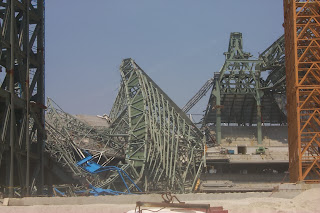 Instantly we all knew that the sub-contractor had pressed ahead with the lift and the crane had dropped its load into the stadium, bringing down half the building's roof into the bowl. Once we stopped staring opened mouthed at each other we ran outside and Big Blue, the crane that had dominated the city skyline, was gone.
And it had brought down a smaller crane assisting the lift, and in its basket were Jerome Starr, Jeffrey Wischer and William DeGraves who fell 400 feet to their deaths.
The police cordoned off the site as a crime scene, but late that night I was called onto the pitch to provide some drawings for the District Attorney. Under the floodlights one side of the stadium, 'left-field', looked stunning, spanning 180m. Perfect.  Just as we had designed it. Turning around, the right-field was a twisted mass of metal – 2,000 tonnes of scrap.
And here was the outline of a body drawn on the gravel. We've all seen these in police dramas - they are almost a cliché. But the powerful absence of the man who had lain there is what I will always remember. I can't begin to imagine what that absence meant and means for his family and friends.
As unfortunately seems inevitable a protracted court case followed. Eventually this concluded that poor decisions by a few key individuals on site were the primary cause. I recall from the court case that the winds were gusting above the crane's design speed. The anemometers measuring it were in the wind shadow of the stadium. The piece being picked was slightly heavier than calculated. More louvers had been fixed on it, increasing wind drag. On the day those were the errors that killed three men.
But what other things led to a culture on site where these errors could happen? It came out court that the client had created a muddled procurement route for the roof, muddying issues at bid and creating conflict throughout the design stages. The design team had agreed reluctantly to a very challenging delivery programme and then struggled to get complete information issued. The sub-contractor switched itsconstruction approach to a radical new way late in the day. Disputes occurred about whether the design requirements were being followed.
Stories typical of many projects and spread over several years, but do they contribute to a job-culture that can influence key construction decisions?
And meanwhile the 'drop dead' date of the first game of the season got ever closer as the programme started slipping behind, and evidently key individuals were introduced on site with the aim of whipping everyone to go faster.
The London 2012 Games had an exemplary health and safety record. Note also that there was never a panic in the press about it being delivered late. No doubt things dropped behind schedule sometimes, but realistic plans must have been put in place to pull that time back. Evidently a culture where corners were cut never developed.
So, as designers what can we do to reduce risks, particularly when projects face tough deadlines?
•
- All the way through the job we must engage with and support all the project-wide safety initiatives. We must be an active part of the safety-culture that the project develops.
•
- We need to agree to realistic delivery programmes and then deliver fully to them. If we hand over late or incomplete information we are putting those further down the line under extra time pressure, which increases the possibility of error.
•
- We need to have the courage to be the whistle-blower. A disregard on site for quality and design issues can be symptomatic of a culture that also shortcuts on safety. As individuals we sometimes need to step forward and point out the thing that everyone else doesn't want to see.
•
- Finally, be aware that looming deadlines and delays put pressure on the whole supply chain, which in turnincreases the chance of error. Be extra sensitive and do everything you can to relieve that pressure.
At the stadium in Milwaukee a statue commemorates Jerome Starr, Jeffrey Wischer and William DeGraves. Immortalised but gone. Sadly I don't know the names of those who died at São Paulo. The news’ focus remains on the immovable first game.
Posted by Unknown at 12:07 pm